Kedzie Avenue is a major north-south Street in Chicago, Illinois. Most Chicagoans probably don’t know the street was named for a Scotsman, John Hume Kedzie. He was an early real estate developer and community leader.

Adam Kedzie, his grandfather, had emigrated from Hawick, Roxburgh, Scotland in 1795 with his wife and eight children and his maternal grandfather, Robert Hume, and crossed the Atlantic on the same boat. They all settled in Delaware County, New York.

Our John H. Kedzie was born in Stamford, New York, on September 8, 1815.  He graduated from Oberlin College in 1841 and was later admitted to the Bar. In 1847, he came to Chicago and immediately became a member of the St. Andrew’s Society. He was elected president of the Society in 1854 and remained a member until his death. Mr. Kedzie gradually switched from the law to real estate and became one of the leading men in Chicago. He was also one of a small group of men who first organized the Republican Party.

Mr. Kedzie was married twice and apparently both his wives were named Mary Elizabeth. He married his first wife, Mary Elizabeth Austin in July, 1850. She died August 30, 1854. One child was born to this marriage also named Mary Elizabeth. That child died August 30, 1855. Three years later, June 17, 1857 he married Mary Elizabeth Kent. Her father was the Rev. Bernard Kent who was associated, I believe, with the First Presbyterian Church in Chicago. It appears she was 22 years younger than her husband. This marriage produced a son and a daughter. She died June 26, 1913 and is buried in the family plot at Rosehill Cemetery.

In 1868, the Kedzie’s moved to Evanston, Illinois, where he was instrumental in laying out the Kedzie and Keeney’s additions in South Evanston. Kedzie Street is named in his honor. In addition to his work in Evanston, Mr. Kedzie was also involved in the development of Ravenswood and took an active part in laying out the Lurton and Kedzie additions in Jacksonville, Illinois. He built a beautiful residence in Evanston which was destroyed by fire on December 9, 1873. They rebuilt, but that home was also destroyed by fire in December 1880.

Mr. Kedzie was a trustee of the First Congregational Church in Evanston and their home was at 1514 Ridge Avenue. Both Mr. And Mrs. Kedzie died at home and their funeral services was held in the residence. I doubt their home has survived but perhaps someone living in Evanston could check and let me know.

“No Kedzie is known to have been arrested as a violator of the civil law, to have been intemperate, are depended on charity, are paid less than 100 cents on the dollar, and none have reached the early years of adult life without having become a member of the church.” Chicago: Its History and Its Builders.

The Kedzie burial plot at Rosehill Cemetery in Chicago is in section M, lots 73, 74, and 75. There is a monument in the center and the graves are arranged in a circle. The monument has suffered some damage over the years and it appears that no one presently visits to pay their respects. I usually drive by the location three or four times a year.

Recently our president, Gus Noble, was able to purchase photographs of Mr. and Mrs. Kedzie. These will be placed in the Scottish American Museum. 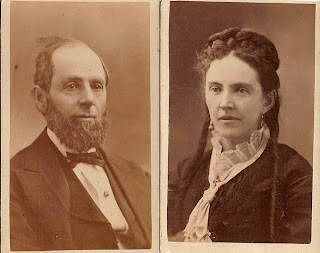 March 2, 2013 - You are invited to attend the next meeting of the Scottish-American History Club and hear a presentation by Leslie Goddard. Her presentation will be “Remembering Marshall Field’s.”

For more than 150 years, Marshall Field and Co. reigned as Chicago’s leading department store. This illustrated talk traces the store’s history from its beginnings into a world-class trendsetter.