Some of you will remember Mike Copperthite who brought fresh-baked pies from Washington, D.C. to our History Club meeting this past year. Just getting the pies to Chicago was its own adventure that took the cooperation of the TSA, pilots and passengers.

I don't know anyone who works harder at keeping his family heritage alive than Mike does. He has begun making pies again in memory of Henry Clayton Copperthite. The proceeds go to his community. What you see below is a full page advertisement in the local newspaper advertising Christmas Eve. I wish my family was closer so we could take part in the ceremony.

Mike not only is giving honor to his own family by this Christmas Walk, but to the hundreds of veterans buried at Oak Hill. Please read the story and let it be my Christmas greetings to all of you who regularly read our postings. Merry Christmas and Happy New Year from Mike Copperthite and my family. 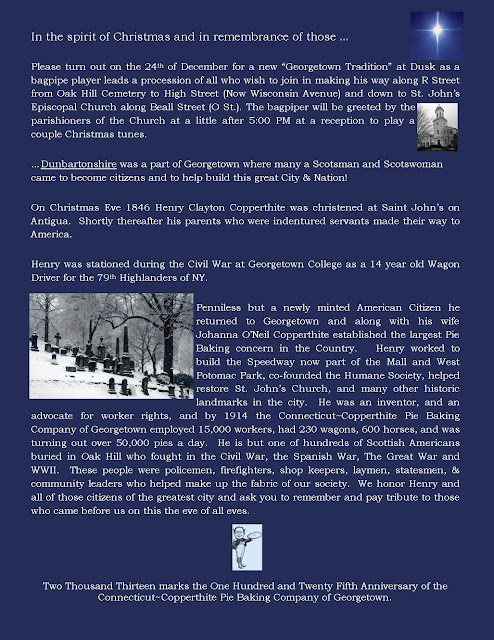 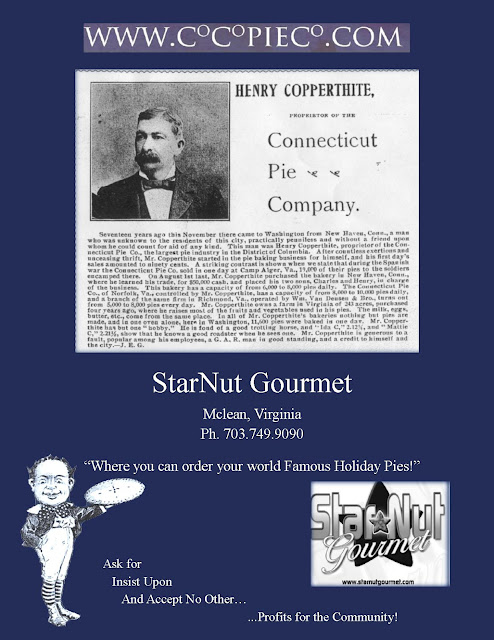 Posted by wayne rethford at 12:03 PM No comments:

They called it the Wigwam

It was made entirely of wood and lighted with gas. There were no seats, except on the platform. The more than 10,000 guests all stood and were in constant danger of fire. The Chicago Tribune said it was “strong, compact and weatherproof.” The floor and galleries “to be a series of broad stairs or platforms on an incline which will allow short men every advantage.”

It was built for a tall man, a future President, who stood 6 feet and 4 inches, but he would never visit the building. Later, a short man, only 5 feet and four inches, would give his final address to the American people here. Once its mission was completed, the old Wigwam moved along like the Indian tribes before it.

You probably have already guessed that a Scottish man built the building. It cost $5,000 in 1860 and the money was donated by friends - mostly Republicans. On one side of the building was a large eagle and shield supporting a flagstaff. A banner was to fly with the statement “Irrepressible and Undivided.”

The Wigwam was built to hold the 1860 Republican convention that nominated Abraham Lincoln for President. On the appointed day, the Wigwam was filled with the supporters of Lincoln and, when Norman B. Judd placed his name in nomination, the building shook with cheers. The state of Indiana seconded the nomination and the Governor did a “comic, capering dance with hat and cane.” Cannons were fired from the tops of buildings and thousands cheered in the streets. The nomination was complete and as the Wigwam rattled from the cheers - its mission was now fulfilled.

The Wigwam was also the place where Senator Stephen Douglas made his last address to the Nation.  He said, “I express it as my conviction before God that it is the duty of every American citizen to rally around the flag of his country.” Thirty days later Douglas was dead and buried in Illinois’s smallest state park on 35th Street on the south side of Chicago.

The old Wigwam died a few years later on Sunday, November 14, 1869. It was then described as the worst building in all America. The Tribune reported that “Dense clouds of smoke obscured the moon, while at the same time angry flames illuminated the nearby streets.” Crowds of people came to watch the old building die and when it was over all that remained were “blackened beams, crisped rafters and charred cinders.” The President was dead. Douglas was dead. The Wigwam folded and now only a small plaque marks the spot.

The carpenter who built the building was John McEwen (sometimes spelled MacEwen). Born in Perthshire, Scotland in 1823, he came to Chicago in 1849 and married his wife Elizabeth in 1857. Elizabeth was ten years younger than her husband and the union would produce four children - John J., Paul, Alfred and Mary. McEwen was “well known as an early day builder and contractor” or so the paper said.

Putting McEwen’s life together from the sources that I have available has been difficult. We know that Elizabeth died July 2, 1901, at their residence, 512 LaSalle Ave. The short announcement does not say where she was buried. John McEwen died in 1909 but the Chicago Tribune does not carry any notice of his death or any comments.

John McEwen, like the old building at Lake and Wacker, just folded his tent and left.

One of our members and a reader of our postings owns a bed and breakfast in Appleton, Wisconsin. The web site is theroostbandb.com. The direct number is 866-803-7814 and speak to Tom. Beautiful. You might want to visit sometime.

Alexander McClurg’s grandfather came to America from Northern Ireland in 1798. The family probably came from Scotland but I have been unable to trace them. He was an Ulster-Scot which we Americans often, erroneously, refer to as Scots-Irish. His father was Alexander and his mother, Sarah Trevor, was born near Chester, England. His family settled in Pittsburgh and the father built the first iron foundry. Our subject, Alexander C. McClurg was born in Philadelphia, 1832.

Alexander spent most of his early life in Pittsburgh where he attended the public schools. He attended college at Miami University in Oxford, Ohio, and then began a study of the law under the Honorable Walter H. Lowrie, Chief Justice of Pennsylvania. Unable to complete his training because of health reasons, he came to Chicago in 1859 and became a clerk in the book store of S. C. Griggs and Co.

When the Civil War began, he enlisted, but his unit was not called to active service immediately. He used the time to study military tactics and to help raise a unit called the “Crosby Guards.” The Chicago Tribune reported that on April 29, 1862, at the home of Mrs. Franklin on Washington street, Capt. McClurg was presented with a “splendid sword, sash, belt, revolver and uniform. A cotillion followed after with a hop, which reached far into the small hours.” (Not sure about the definition of “a hop.”) I wonder what happened to the sword, belt and gun?

The Guard was made part of the 88th Illinois infantry and McClurg was advanced to the rank of lieutenant colonel. He later became the Acting Assistant Adjutant General and Chief of Staff of the Fourteenth Army Corps. “He acquired a reputation for fearlessness to the point of rashness.” He had an extensive military record including Sherman’s march to the sea and became a brevet Brigadier General before he was discharged on September 19, 1865. Returning to Chicago, he became involved in the book business.

The McClurg book store was cursed by fires. It burned in the Great Fire of 1871 and the second store burned in 1899. The new store was built on Wabash near Adams. They sold stationary, books, office supplies and fishing tackle. The General even took time to publish The Dial a literary magazine of note. (Most issue can now be be read on the Internet). The company also published Tarzan and Zane Grey. Business records can be found at The Newberry Library.

In 1870, General McClurg married Eleanor Wheeler.  Her mother was a sister of William B. Ogden, the mayor, and she was from New York City. One son, Ogden Trevor, was born to the union. In the 1890s they built their residence of 25 rooms at 1444 Lake Shore Drive. It was designed by Francis Whitehouse, and modeled after a French chateau. Their son occupied the house for several years and in 1935, it was occupied by the Polish consulate. The beautiful old home was demolished in 1954 and replaced by a condominium.

McClurg Court in Chicago is named for the General.

In politics the General was independent. He was a member of St. James Episcopal Church and died without a will. Don Campbell, or members of the Cameron family, may know about the Ogden Trevor McClurg Memorial Trophy at the Chicago Yacht Club. “It was presented to the club in 1940 by his widow. Mr. McClurg was a book publisher and racing yachtsman.” The trophy is somehow connected to the Race to Mackinac.

There are descendants still living somewhere. In 2006, an article appeared in Crain’s Chicago Business about the sale of McClurg Court Center for $127 million. Only the complex was sold. The land was leased for 62 years from the descendants of Alexander C. McClurg - no names given. The son, Ogden died in 1926.

I spent some time reading about (and trying to make her Scottish) a lady named Mabel Slade Vicker. I failed to discover her heritage but in the process came across the names of General and Mrs. Alexander C. McClurg. Miss Vicker was brought to Chicago by a group of parents who were interested in the “educational principles of Francis W. Parker.” For the first two years, she taught 12 boys in the home of Eliphalet W. Blatchford. After which the school was moved to the home of General and Mrs. McClurg, located at the corner of Lake Shore Drive and Scott St. Their son was also a student and later attended Yale.

General McClurg died from Bright’s disease in Florida, April 15, 1901, and is buried at Graceland cemetery in Chicago. Click here for a picture of his Celtic Cross designed by Tiffany (bottom row, third from left.)